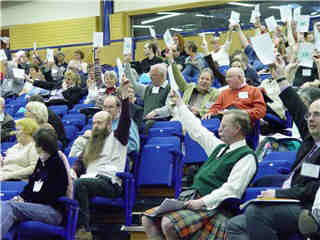 Not long till GA now. Here are the motions, and my take on them.

1) FROM THE UNITARIAN CHURCH, STOCKTON-ON-TEES
That this General Assembly of Unitarian and Free Christian Churches acknowledges that, in order to survive, there is an absolute need for numerical growth. It urges every individual and every organisation to prioritise numerical growth. It requests them to declare it. It requests the General Assembly Executive Committee to set up an organisation and process that will bring together those who seek to promote numerical growth, where ideas, proven or not, can be exchanged, discussed and acted upon.

Well, this is a good effort. I think we're at the stage that everything we do should be concerned with growth. At this stage we really don't have the luxury of being concerned much with anything else. However, I'm concerned that the outcome of this motion will be that a committee will be set up, meet a bit, then produce a report in three years that will not change anything.

2) FROM THE UNITARIAN WOMEN’S GROUP
That this General Assembly of Unitarian and Free Christian Churches recognises and promotes the worth and dignity of all people, which includes the equal rights of men and women, and furthermore proclaims that all human beings are born free and equal and are entitled to all the rights and freedoms without distinction of any kind, including any distinction as to sex.
It further recognises that discrimination against women is incompatible with human dignity and thus promotes the full participation of women, on equal terms with men, in the political, social, economic and cultural life of society, and
furthermore, the cause of peace and the welfare of the world requires the full participation of all people, both men and women.
Be it resolved that all appropriate measures shall be taken to ensure that women, married or unmarried, have equal rights with men in all areas of economic, social and political life and that women are equal partners with men in determining the values, direction and governance of their societies for the benefit of all.
As a first step, all Congregations, District Associations and Affiliated Societies should undertake an audit of all of their activities to ensure that women are enabled to participate fully and equally in all areas.

Well, fair enough. Nothing there I disagree with there. But how do we enforce an 'audit' on congregations in a congregational system?

3) FROM GOLDERS GREEN UNITARIANS
That this General Assembly of Unitarian and Free Christian Churches is concerned by the refusal of the British Government to grant posthumous pardons to the 306 British, Irish and Commonwealth soldiers, some as young as 17, who were executed by firing squad for battlefield offences in the First World War;
Recognises that many of these soldiers, executed for offences such as cowardice, were suffering from shell-shock and other traumatic disorders;
Welcomes activities in support of these pardons in Britain and the Commonwealth, led by the “Shot at Dawn” campaign;
Further welcomes the fact that New Zealand has granted its executed soldiers posthumous pardons and the Irish Government has supported pardons being granted to Irish-born soldiers;
Urges the General Secretary to write to the Prime Minister and the Defence Secretary (of the United Kingdom) calling upon them to end this injustice by granting posthumous pardons to all of those so executed;
Urges all Congregations, District Associations and Affiliated Societies to support the campaigns for these posthumous pardons.

Well, OK. But what difference does the General Secretary writing a letter make? I got nothing against this campaign, but firstly, do we really think us passing a motion makes any difference? And secondly of all the issues in the world to deal with, is this the most important? Aren't there injustices right now to deal with before we deal with injustices of the past?

4) FROM WESTGATE UNITARIAN CHAPEL, WAKEFIELD AND ST
SAVIOURGATE UNITARIAN CHAPEL, YORK
That this General Assembly of Unitarian and Free Christian Churches takes the view that the notion of Intelligent Design is in no sense a legitimate scientific theory and urges that it should not form part of the science curriculum in schools. It calls upon the United Kingdom Government and the Welsh and Scottish Executives to ensure that, if the hypothesis is to have any place at all, it is encountered in the Religious Education curriculum alongside the many other creation myths to be found in the venerated texts of various faiths.

I so support this, but I don't agree with the wording. ID is not a religious creation myth, but a philosophical meta-scientific theory. It's a fundamentally flawed philosophical meta-scientific theory, but it's a bit disingenuous to call it a creation myth. It's possible that my training in evolutionary biology and theology make me more qualified to talk about this than anyone else at the Meetings. But at the same time, can I be bothered to make a contribution to this debate, when I don't believe us passing the resolution will make any difference to anyone?

All together, I suppose I support all the resolutions. But can't imagine any of them making any difference to anyone, with the possible exception of the first one.

Who benefits from all this? Is the world made any more just, loving or fair as a result? Is anyone hungry fed, is anyone naked clothed? I can't help thinking we would be better to all get out of the conference hall, walk into Chester and feed the homeless, do something useful. Or even sing a song a la the Mennonites. Or even just walk around a pick up litter. Us picking up litter would make the world a slightly better place. I'm not convinced our passing motions will.

The first one might make a difference. The rest will not.

Anonymous said…
I do agree with pretty much all your comments on the G.A. resolutions.

One thing I've never got my head round - perhaps I don't have to, but when in the fullness of time you are called to your first pulpit it will become an issue for you - is how & why congregations get involved with charity X rather than charity Y... maybe you'd care to share your thoughts on this one...
9:55 pm