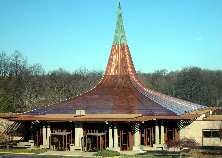 The Ethical Society of St Louis
What does it say about human nature in general, and Americans in particular, that there are such things as atheist churches. For most people this would seem like an oxymoron. I'm sure most people in Britain, the general public, and humanists, would consider it really really weird that Americans have atheist/humanist churches.
There are humanists organisations in Britain, but I'm sure none of them meet on Sunday morning, have 'sermons' 'leaders' and 'sunday schools.' What does it say about how much Americans love going to church, that even those that are entirely atheists, still go to church?
Why is American church-going culture so strong that it survives the complete removal of any metaphysical foundation?
Here's a fun party game: listen to an audio sermon online, and see if you can work out if it's a UU church or an Ethical Society. What does it mean if you can't?
A lot of questions.

Freespirit said…
Equating atheism and humanism opens a big can of worms. Humanism is such a comprehensive term that it embraces both religious and secular. I would argue that all Unitarianism (and UU'ism) has a humanistic thread, but not all of it is atheistic...because we place the center of the quest for truth and meaning in the hearts, minds and hands of unique, individual human beings.
3:14 pm

Anonymous said…
another stereotyping post... such a narrow-minded 'look at me I'm a liberal' viewpoint...

what happened to the INTELLECTUAL tradition of British Unitarianism? When was is taken over by Guardianistas?
11:10 am

Anonymous said…
When you get to Unitarian College Manchester, look in its little library section of Luther King House's for the Ethical Church liturgy book. Traces of it and inspirations from it are on my website.

Yes, I was at UCM. I see some of your comments to be similar to my outlook, including I note a rather recent "conversion" to Unitarianism. Are you sure you know what those Manchester churches are like? With a few exceptions, I found their conservatism like death warmed up, and they did not like me either. I see you are already theologically capable, and have an Anglo-Catholic element in your background. Have you not considered that liberalism in Unitarianism can be conservative, whereas the same liberalism and more can be radical elsewhere? I notice your dislike of Hymns of Faith and Freedom, an example of Unitarian conservative attitudes, and yet your liking for the eucharist. Why?
4:22 am