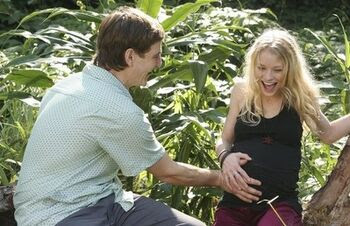 I'm continuing some theological/philosophical reflections while re-watching the series LOST.

One of the recurring themes in LOST is the idea of the "good guys" and the "bad guys." We start the series assuming the survivors (who are the main characters) are the "good guys" and the mysterious "Others" are definitely bad guys. But at the end of series 2 one of the main characters asks the Others, "Who are you people?" and they answer, in an extremely disturbing way, "We're the good guys."

The series develops with a number of different factions appearing, "the people from the freighter" "the DHARMA initiative" as well as divisions among the original survivors. The question remains among all these complicated happenings "who really are the good guys?"

I think one of the most significant lines in the series is an episode when Hurley is having a conversation with his mother about Sayid and says, "he's a good guy." His mother replies, "A good guy does not kill three men. A good guy doesn't kill any men."

The moral nature of humanity is the ultimate theme of the series. The whole storyline is in some ways a bet between Jacob (a God-like character) and "the man in black" (a Satan like character), not unlike the prologue to the book of Job.  Jacob believes that human beings are ultimately good, the Man in Black believes they are ultimately evil. Jacob brings people to the Island. One of the reasons seems to be to prove that people can be good. But often they prove that they are destructive and violent. The Man in Black says, "They come, they fight, they destroy, they corrupt, it always ends the same."
Jacob replies, "It only ends once. Everything that happens before that is just progress."

The Others are in fact "the good guys" in that they follow Jacob and their ultimate aim (to protect the island) is a good one. But that, in a sense, is irrelevant. Jacob is a non-interventionist god. He tells the Others (through an intermediary) the basics of what they need to do. But he doesn't tell them how to do it. And often they decide to do it in violent and evil ways.

For example, Jacob provides lists of people who are important, asking the Others to get them. It is entirely the Others' decision that they get them by kidnapping, terrorising and murdering. The storyline of the first two series revolve around these kidnappings. But they are actually entirely unnecessary. The Others could decide to simply walk up have a chat with the survivors.

It is possible for an ultimate aim to be a good one, but for the means to achieve that aim to be evil.

So the real question is not "who are the good guys?" but "what is a good action?"

There are a number of different people, all with agendas that are good, bad, ambiguous and mysterious, but the pressing moral question remains "what is the right thing to do?" The agenda does not justify violence or immoral means to achieve the agenda.

That's why I was glad that at the very end of the series the Protectorship of the Island is given to Hurley. He was the character least likely to turn to violence to achieve something. All the other characters (I think) picked up guns and were prepared to kill people if they thought it was serving an ultimately good agenda. Hurley tended to resist that way of thinking and preferred to concentrate on community building more than running off into the jungle with guns on some mission. Indeed the only time I think Hurley used violence was at the end of series 3 when he drove a van into one of the Others to save his friends.

This is an act of violence but it is limited, and Hurley objects a few moments later when Sawyer kills an unarmed Other. Hurley seems to have the strongest moral sense of any character, and stands firm most often on moral issues.

So ultimately LOST is not about the battle between two groups of people, one "good" and one "bad" but about a whole lot of people making day-to-day moral decisions that are sometimes good, but often bad, violent and messy.

Anonymous said…
I *loved* watching "Lost" (and you just reminded me that I need to finish up the last season. I need closure!) I often commented when I was an active viewer of the show that, of all the heart throbs on-screen, Hurley is the one I'd choose to date. Which is another way of saying that Hurley seems like the nicest guy. Not that nicest=most moral. But he did seem to be the most in touch with his own humanity during all of the confusion and intense adventure.
5:47 pm

Ella said…
This is the thing. There is no point in looking for "ultimate" good or bad guys.. For the simple fact that they're all "guys" - all just people who don't always make the right choices. They only have a mission or an aim which in itself may be ultimately good or bad. But how people choose to carry out that aim is completely going to be done in human style, which is not ultimately good or bad.
12:58 am

Unknown said…
Through the entire series, I thought "There are NO 'good guys'." I didn't know who I should be "rooting for." Then, digging a bit deeper, I decided that, as in 'real life' there are no ultimate good guys or bad guys. There are a bunch of humans. They all have the duality of light and dark; all humans do. They all have their own way of achieving what they believe to be the right thing to do. Kudos, Lost, for completely relatable characters! They are like 'real" people. Some are a bit more dark than others, but even the ones with more 'light' tendencies would do completely terrible things for those they lived and things they believed in.
7:36 am