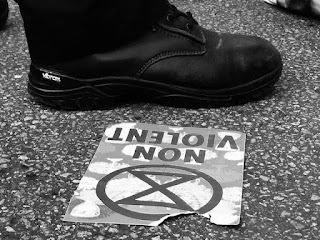 Inevitably there is always a lot of debate about the tactics of Extinction Rebellion. Of course as people concerned about the climate crisis this isn't what we want to be talking about - we want to be talking about the climate crisis and the government's inaction. We want to tell the truth about the mess we're in and for the government to start acting on the emergency. But it is also important to be as clear as possible about the tactics and the reason for them. I think it's important for both members of Extinction Rebellion and for the general public to be as clear as possible about why we do what we do.

Non-violent action must be rooted in a spiritual/moral foundation. It is based on the idea that there is right and there is wrong and it is the moral duty of everyone to do right and not to do wrong.

Sometimes a citizen breaks this covenant. It's called breaking the law and it means you get arrested.

But sometimes the state breaks this covenant. There are times when the state is no longer behaving morally. They may be still obeying the law of the land, but they have broken a higher moral law. If you like, they have broken God's law.

This is not something to be taken lightly. It's not something you can do just because you disagree with the state. You don't do it because you disagree with this particular policy or this particular law. You only do when you are convinced that the state is behaving so immorally that the covenant is well and truly broken. You only do it when you believe that the state is in such an immoral state that it is losing its legitimacy as a democratic state acting in covenant with its citizens.

But for some with the position, the ability, the privilege, their conscience may lead them to break the law.

The intentional breaking of the law, non-violently, is a symbol that the covenant has been broken, and that the citizen no longer recognises that the state has moral legitimacy. In the tradition of the Hebrew prophets it allows someone to symbolically act out the broken covenant. It brings that state of moral crisis into the light for all to see.

Those of us, like me, part of Extinction Rebellion, are acting because we believe the British state is morally bankrupt, has lost moral legitimacy because it is essentially guilty of genocide. Indirectly, I'll grant you, and sort of by omission rather than by commission, but nevertheless guilty of genocide. The carbon emissions we have released into the atmosphere are killing people in India, Bangladesh, Mozambique, the Pacific Islands, and it's getting worse and worse every day. We have known this for decades, ignorance is no defence. By the British state refusing to urgently reduce carbon emissions it is saying that these lives do not matter, that it is prepared to let people die rather than change certain ways our technologies and economies operate.

By not acting on the climate crisis that is continually killing people the British state has lost moral legitimacy. So have lots of others of course, but I am a UK citizen so my covenant is with the British state, and that's where I'm going to act.

Last week I heard a commentator say "The Suffragettes had no vote, so they had to act directly. The civil rights movement in the States was made up of black people who had no vote, so they had to act directly. So if you do have the vote you shouldn't be doing this kind of thing, you should be just using your vote." I thought to myself - that's a good point actually. But then I thought some more. The problem with it is that the people suffering from the climate crisis, the citizens of Kiribati for example, do not have a vote in the UK, a country that for over 200 years has been one of the most polluting. Neither do those under 18 and those yet to be born. The democratic system of voting, because it is national and not international, has limited use in addressing global problems. Our system is of course caught up in centuries old colonialism that has, and continues to, work for "white civilisation" and against black and brown peoples. So direct action become legitimate because it is acting in solidarity with those who have no vote.