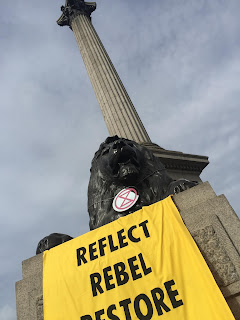 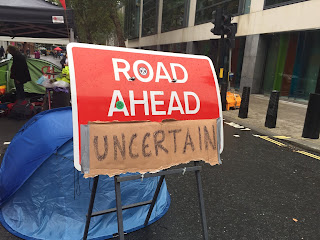 I’m writing this from London on Day 4 of the International Rebellion in October 2019. This is the second major action in London this year from Extinction Rebellion. I haven’t clearly thought out my thoughts so I don’t really know what I’m about to write. I might try to write something clearer later.

I suppose I want to start by saying why I’m here. I suppose I’m here primarily because I’m scared. I’m shit scared and the reality of what’s going on in the world is something that I’m constantly grappling with. It’s a year since the IPCC report came out saying we have 12 (now 11) years to avoid disaster. Governments still aren’t acting. I’m scared. There’s a real threat to human civilisation as we know it. And for the most part we’re actively ignoring it. The chant from the youth strikes (though shouted with youthful enthusiasm) still fills me with utter horror: “You’ll die of old age. We will die of climate change.” That’s what our children are saying directly to our faces. That’s what we’re currently heading towards.

It’s hard to imagine. It doesn’t seem real. But then I find it hard to imagine that one day I will die. But as hard as it is to imagine, that is what will happen. I will die, if I’m lucky, of old age. And if we keep going in this direction our children (or many of them) will die of climate change.

I’m scared. And I’m profoundly sad. I’ve known intellectually about climate change for decades. But I think it is only this week that I’m finally emotionally experiencing climate grief. I kind of knew it had to come one day. As I read and think this week I’m beginning to feel it in my bones. I’d like to give you hope. I’d like to tell you I’m inspired. But the fact is I’m on the verge of tears. I feel sorrow in the pit of my stomach. Because I’m finally deeply considering the reality that it might be too late. We might fail to avert this disaster. We might be heading towards starvation, genocide, disaster in my lifetime, even though we can see it coming decades off and we know how to avert it. We might just decide it’s too difficult to bother trying and leave it to the next generations to sort out.

So I’m here. I’m in London. I am in a privileged position. I can take this time to do this. I can afford a few nights in a youth hostel. I can risk getting arrested - though I’m not yet brave enough to aim for it. I can be here so I’ve got to be here. It might be hopeless but I have to try. To beg government to do something. I’m not working as hard or as bravely as some people. But I’m here. Just another human. Just another body. I’m here.

The police have been, I don’t want to say aggressive, but pro-active and assertive. When I arrived at Westminster tube station I tried to walk towards Lambeth Bridge, where there was supposed to be a “faith bridge” occupied by faith communities. But my way was blocked by intimidating lines of police every where I tried to go. They arrested several faith based activists and so we never got to stay and pray about this crisis on that bridge.

Equally the police slowly cleared the street in front of the Home Office where Welsh activists were based. In large numbers they pushed us back and back until they came to people who would not move, the “arrestables” who stayed put until arrested. Some “locked on” using complex tubes so police had to cut them out before they could arrest them. It’s all a matter of time. Arresting someone takes time, administration, and several police officers. The whole point is to take up as much time, money, faff, for the state as possible. To be as irritating to the state as possible while remaining nonviolent. To insist that when state action (or inaction) is immoral, irresponsible, criminal, it is the duty of moral people to act against the state. There is a higher moral law. When the state does not follow it, we must be in revolt against the state.

The state is sometimes scary. It’s designed to be I suppose. I’m naturally law abiding and a little bit afraid of the police. There’s been moments when I’ve felt intimidated by the police. But I think the good thing about Extinction Rebellion is you can do whatever you’re comfortable with. So if you think “Oh I could never do that.” It’s OK, just come along and see what’s going on. Start at the shallow end and see what happens. In the UK the police don’t charge in with batons to nonviolent protests. If you’re uncomfortable with a situation you can always leave. But please, talk about this climate crisis, find out about it. Talk to your friends and family about it. Write to your politicians about it. Or, if you’re reading this during this Rebellion, and you can, pop down to Trafalgar Square and see what’s going on.

Nigel said…
Please do not be scared. From my young adulthood I've seen human kind avert all manner of predicted dooms. In the early seventies it was a catastrophic global shortage of water, an immanent global famine, very imminently in the early eighties was "mutually assured destruction (I worked on the local councils bunker), mid eighties a new ice age( now looking very unlikely) the millennium "bug" and of course a variety of super bugs set to annihilate humanity. Have faith in both the planet and indeed human ingenuity.
11:12 pm