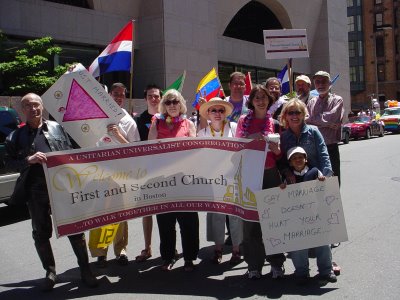 I was looking forward to Birmingham Pride. I hadn't realised it was coming up so soon. Birmingham is always the first pride festival of the summer. Unfortunately I realised that I'm preaching in Wakefield on the Sunday so I'll miss that day. Then I remembered that I work on Saturday so I will miss that day too.

I looked up the Birmingham Pride website to check details. The more I read of this, the more disillusioned I became. It confirms everything I've come to realise about the queer community in Britain. Firstly, the festival is not free, as it has been in previous years (is this the first year it's done this? I haven't been since 2003). Birmingham was always the only major pride festival that was free. Not any more.

Secondly, Pride is organised by the Birmingham Gay Business Partnership. This is what I've come to realise comparing the queer community in the UK to the US. In the UK it's all much more commercial, and not political or spiritual or community-based. In Birmingham Pride is a big festival organised by the big gay night clubs to promote themselves. Boston seems to be a non-profit community organisation, and seems to be full of churches and cultural and community groups. My Birmingham friend was very struck by this when he went to New York Pride.

Compare what it costs to have a stall. In Birmingham a small stall cost £194.25 ($369), and that's when you book six months in advance otherwise it's more expensive. There is no reduction for non-profit organisations. In Boston there is a reduction for a non-profit organisation to have a small stall for the equivalent of only about £58 ($110) and you only have to book a month in advance. That's a big difference.
It's very depressing. The gay scene in this country is so apolitical, narcissistic, commercial and superficial. That's why most people get disilluioned with it after a while. That's how Pride can seem. Marching with 500 Unitarian Universalists in Boston Pride last year summer was amazing. One of the most amazing experiences of my life. I want to bring some of that attitude to the UK. I'm convinced more than ever for the need for a queer-affirming faith in this country. The queer community need a kick up the arse to be more politically engaged and really a community, not just a place where we get drunk and pull (not that I'm against those things in themselves) .
I'm not sure how to help this to happen. I might wander over on the Monday and hand out some Unitarian leaflets. I'm not going to be able to do much in Birmingham this year. Maybe next year in Manchester.

boyinthebands said…
Birmingham Pride sounds a lot like the county fair passing for Pride in Washington DC. Despite the parade (not march) passing almost under our window, I doubt we'll attend any part of it.

Ah, and you might want to define pull a bit more fully for your US audience. It took me a minute to remember the differences in the language . . . .
1:19 pm

Anonymous said…
pull = take a person home and engage in sexual activity with them.
8:02 pm

LaReinaCobre said…
This is really sad. I didn't know there were any differences in the gay pride parades in the US and the UK. I've been to a few of them in Portland and they have always been so life affirming and fun for me. All sorts of folks show up, demonstrating the diversity within the queer community.
12:26 am