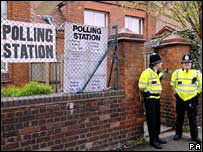 Today is election day for 4360 council seats in England.

In Birmingham, the biggest metropolitan borough in the country, 41 seats are up for election, that's a third of the council.

At the last council election in Birmingham there were a large amount of vote fraud. An election judge said the evidence he heard would 'disgrace a banana republic.' Birmingham city council leader Mike Whitby has asked for police officers to be deployed in wards considered at greatest risk from fraud and intimidation.

September 30, 2020
I read a lot of books about how Christian churches should radically change, embrace the postmodern reality, get back to biblical principles, abandon old models. A lot of these books will criticise the old models under the label of "Christendom" - that European and colonial idea where power, culture, and religion are all aligned. In Christendom everyone is assumed to be Christian by virtue of being in a "Christian country" and the church is in the centre of power, resulting in, in some cases, state churches such as the Church of England.  I agree with these criticism, but I feel like the whiteness of so many of these writers blinds them to the true sins of Christendom. It is not simply that Christendom is an old model, and we need to move on to something more relevant. I feel like sometimes that's what these writers are saying. Sometimes it feels like the criticism doesn't add up to anything more than "this isn't fashionable anymore".  But it
Post a Comment
Read more