A tale of two protests 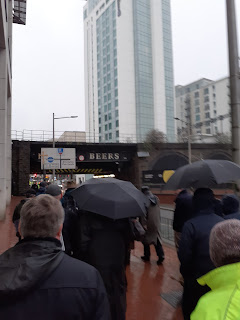 I was at two different protests recently. Both were in the middle of Cardiff, and both at points were on exactly the same routes. One was a protests, organised by the Cardiff People's Assembly, protesting the cost of living crisis. The other was a procession between two Anglican churches in Cardiff as an act of witness to pray for peace in Ukraine.

Now of course those issues are very different, but at the same time it really struck me that I seemed to be the only person who was at both of these different events. Both in the middle of Cardiff, both virtually in the same place, just a few days apart. I was the only person at both the left wing cost of living protest, and the Christian pray for peace in Ukraine event.

It really got me pondering - why do I often feel like I'm the only person who goes to these different things? Why is there so little crossover?

I think part of the answer is that these things happen in silos. There's the left wing activist community silo and the (mainstream) Christian community silo. And never the twain shall meet.

Why? Well sure, there are only so many hours in the day, and you have to discern what to give your energy to. And you also have to work out if you feel like you will be comfortably welcome in some spaces. Black people and people of colour have to decide if they have the energy to turn up in mainly white spaces. And we all have to make those kinds of decisions.

But I also think there's something of organisational ego, or sectarianism going on here. I want my organisation's event to be successful, because then I/we will feel successful. I'm not saying people don't have good intentions as well. I'm noticing these thought patterns in myself as well. We're all a mix of different motivations, aren't we? I am accountable for what I do, professionally, and the fact is, if I produce a report that says "I organised and event and X people turned up" that sounds much better than "I attended/supported someone else's event and X people turned up." I feel better. My organisation feels better. I feel like I'm achieving something.

But are we achieving much, each operating in our different silos? Ralph Waldo Emerson said, "There's no limit to what can be accomplished if it doesn't matter who gets the credit."

The opposite of that is that maybe we're not accomplishing what we need to because we are pre-occupied with who gets the credit.

How do we get better at networking? At bringing together all groups fighting for a better world? Sure, we won't all agree on everything, but can we agree on enough to achieve more? Can we at least communicate better, so we know about everything going on?

Can we step back and ask - what are we aiming for, and how can we collectively get there? How could we build peace and justice in our city and in the world in a collaborative way?

Perhaps that is naive. But I just hope for a time when I don't feel like I'm the only one who goes to different types of protests/events, where it all feels more networked, more connected.

August 09, 2009
When I started this blog nearly 4 years and nearly 300 posts ago one of the labels I used for it/me was "radical." Perhaps I used it a little unreflectively. Recently I've been pondering what radical means. A couple of things have made me think of this. Firstly this blog series from my friend Jeremy, which explores a distinction between "radical progressives" and "rational progressives." There is also this definition of radical, liberal and conservative from Terry Eagleton quoted at Young Anabaptist Radicals : “Radicals are those who believe that things are extremely bad with us, but they could feasibly be much improved. Conservatives believe that things are pretty bad, but that’s just the way the human animal is. And liberals believe that there’s a little bit of good and bad in all of us.” What interests me is finding a way to express the tension I feel sometimes between myself and the wider Unitarian movement. One way to express this is to say I
3 comments
Read more