A letter from Glasgow 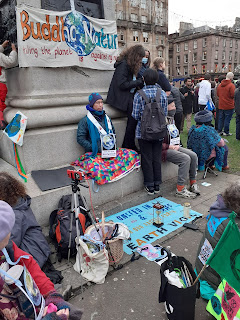 OK, I'm actually not writing this from Glasgow, but from back home in Cardiff, after returning from Glasgow a few days ago.

I spent a long weekend in Glasgow, in the middle of the period of the COP26 conference. I went to Glasgow because I felt I had to, I needed to, and I was able to. Of course not everyone has the privilege of time and money and freedom from other responsibilities to do something like that. But I did, so I went. I marched with the youth Fridays for Future march, I marched with the main climate justice march on the Saturday, and I joined with Christian Climate Action and Faith Bridge to take part in the interfaith Earth Vigil, every day holding an interfaith space for meditation and prayer on the street.

Every day the Earth Vigil was held in a different location, depending on what else was going to happen. Some days it was at the entrance to the Scottish Event Campus where COP was happening, other days it was in the middle of the city, amongst loud crowds, or in relatively quieter spots, but still within the busyness of the city.

I couldn't tell you exactly why prayer in such places seems so vitally important to me. I'm still trying to work out how to explain it. But somehow it seems like a really vital thing. I'm not saying marching, or direct action aren't also important tactics, they are. But somehow active, present prayer feels like the necessary foundation for those other things.

I'm reminded of this scene from Selma, when Martin Luther King pauses and kneels in prayer, to find the wisdom to decide what to do in a potential confrontation with the police:

I want to start with prayer, and then find the wisdom for what else needs to happen.

I have no deep wisdom and what has happened, and what is still happening, as I write, at COP26. Perhaps some kind of "progress" will be made, but I'm certain it will not be enough, and that is very upsetting. It may be that in all kinds of ways, things will get worse before they get better. And I know that is little comfort to climate vulnerable nations who will suffer from our inaction and slowness.

The situation we're in is suicidal and genocidal. It's irrational in the extreme that we won't effectively act in a way that saves lives. We're prepared to crush human bodies on the machinery of our global economic system, rather than change it. And history will judge us very harshly for it. There is still no sense of real urgency from politicians and from the general public about this.

It was good to march with 100,000 people who cared about climate justice, but I feel like it needs to be more like a million for politicians to really start taking notice. And of course there's a reason it's not that many, it's because (in the UK) climate concern is really an optional thing to care about if you're white, middle class and have the time and energy to care about it. If you're really struggling day to day, you don't have the energy to care about polar bears and ice caps. Of course you don't. And until we start making the links between the suffering of the global south, the suffering of the poor in the global north, the general suffering of all of us in a capitalist system, and the suffering of the natural world, then we won't see that mass movement. And yes I put a large part of the blame for that on the white middle class climate movement (of which I am a part).

The thing is the the climate crisis is not an "issue" to be considered if you have the time to do it. The climate crisis is the physical outcome of the capitalist system, just as there are economic, political, emotional, and psychological outcomes of the capitalist system. What's needed is an understanding to link it all together. Once we realise that employment insecurity, housing insecurity, bad mental health, inroads into a public health system (in our context) and food insecurity, extreme weather, failed harvests in the global south are all part of the same story we will begin to be a mass movement demanding change. How do we get there? I don't know. I'm trying to work out it out. I will continue to pray and try to work it out.

Helen parsons said…
Thankyou for being there for me Steve. I am a Stroud unitarian and largely immobile. I am a geographer so appalled by COP26. what are we to do? Ofcourse I gift organizations but there is a deep malfunction in communication between peoples and when the situation is so dire. I pray too!
All best Helen
12:19 pm

Phil Tomlin said…
Totally agree but to get people and politicians interested you have to tell them what they will lose - both financially, (in respect of our corrupt tory government) and materially in terms of the general public. Make it local and make it relevant then people will take notice. I've used this when talking to them about recycling and it works for me.