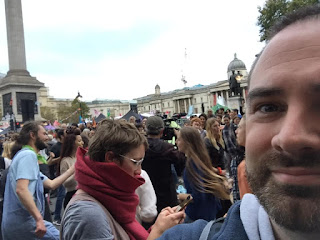 I remember being at some protest outside the Senedd once, and someone introduced me to someone else, and said, "Stephen is an activist."

Because the truth is that since I moved to Cardiff I have kept myself at the periphery of a lot of activist groups. I go to meetings, I hear about things, I turn up at protests, but I have rarely got really fully involved. Why is that?

It's not for the reason that I don't have time. I do, in fact. But often I sit in these meetings and protests and think "Is this effective? Is it worthwhile? Is it going to produce something at the end of it all that is worth the effort?"

I suppose, coming from the world of church I know that an institution can end up caught up in its own internal processes. It can become all about committee meeting, projects, a sense of "work" - but the ultimate outcome can be ineffective or even nonexistent. We can forget the ultimate mission in the midst of all the organisational work.

And so I suppose I have been hovering on the edge of a lot of things because I don't want to get sucked into work until I'm sure I'm called to that work and the work is worth doing. I don't want to spend hours and hours organising an event or a protest unless I can think that it's worth doing.

Maybe this is my privilege. Maybe if I felt the stings of injustice in my life more keenly I wouldn't be this reluctant. I'm open to that being, true, but I think it's something else I'm wrestling with.

Part of it is a sense that a lot of activism just doesn't work. We have an event, or a protest, we hear some speakers but has it really shifted the system we live under? Has it changed someone's mind? Has it shifted the culture in a different direction? This is one of the argument's for Extinction Rebellion's direct action tactics: "we've tried other things and they didn't work". But after three years I personally feel it's time for Extinction Rebellion to say that their tactics aren't working either.

My spiritual model is a man who failed. Jesus went to his capital city to confront the powers with the truth of God's anti-empire. But it didn't work. They killed him. He failed.

So it's not just about "success". But it is about... a model of change that is rooted in something solid and soulful. A model of change that starts with the spirit and is incredibly mindful of what it is doing and why the whole way through. I suppose that's what I'm always looking for, and feeling like I'm not finding, and that's why I don't get heavily involved in a lot of campaigns. If I'm going to be an activist, I have to be a spiritual activist, and that's what I'm yearning for the whole time.