What would a "Buddhist kind of" Christianity look like? 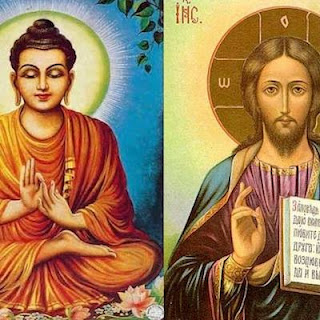 I keep playing with the idea of a "Buddhist kind of" Christianity. This comes from my experience of dynamic Buddhist groups that are thriving and growing in a western context. Sure, those Buddhist groups are never going to grow so that they are the majority (or anywhere near) in a country like Wales. But I have no doubt that they will remain a growing, dynamic, minority.

And so I think - what is it that Buddhists are doing that Christians aren't? And what would it mean if Christians did those things? And yes, generalisations are hard, and Buddhism is a very diverse thing, so I'm really just speaking out of my own experience, rather than from doing an in-depth survey.

This is not a well-thought through list (this blog is really for thoughts-in-progress) but here's what I think a "Buddhist kind of" Christianity would look like:

Maybe there's more things to put on the list, but this is what I'm thinking so far.

September 30, 2020
I read a lot of books about how Christian churches should radically change, embrace the postmodern reality, get back to biblical principles, abandon old models. A lot of these books will criticise the old models under the label of "Christendom" - that European and colonial idea where power, culture, and religion are all aligned. In Christendom everyone is assumed to be Christian by virtue of being in a "Christian country" and the church is in the centre of power, resulting in, in some cases, state churches such as the Church of England.  I agree with these criticism, but I feel like the whiteness of so many of these writers blinds them to the true sins of Christendom. It is not simply that Christendom is an old model, and we need to move on to something more relevant. I feel like sometimes that's what these writers are saying. Sometimes it feels like the criticism doesn't add up to anything more than "this isn't fashionable anymore".  But it
Post a Comment
Read more