To slay the demon you have to name the demon

The principle of needing to name a demon before you can kill it is well enshrined in magical folklore, and I know it particularly because the principle was talked about by the author Terry Pratchett.

Naming demons is the first step to slaying them. Names have power. This is magical folklore - that once you name something you have a degree of power over it. You know its truth and that is powerful. There is a deep truth here.

The fact that the UK has started naming winter storms shows how this effect works psychologically. If you say "it's going to be windy and rainy tomorrow" it doesn't have the same effect as saying "Storm Denis is coming!" Naming makes something more real, we take it more seriously and we respond to it.

This idea has been on my mind as I've been reading This Changes Everything: Capitalism vs the Climate by Naomi Klein. 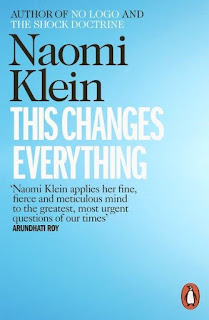 I've not even got half way through but it's an exhilarating read that I'm thoroughly enjoying. I'm trying to work out why it feels like a positive experience to read about the god-awful mess we're in with the climate crisis. And I think it's because she puts her finger on exactly what the problem is: exactly how the doctrines of neoliberalism, free market fundamentalism, growth-ism, and the powerful disciples of these ideologies are the real blocks to climate action. It's because it feels like she is naming the demons, and suddenly it feels like we might be able to slay them (metaphorically) because we have finally named them.

The great problem with climate activism is the sense that we don't know the names of the demons. We desperately say "somebody needs to do something!" but we struggle to answer questions like: who? Who needs to do what? And why aren't they doing it? What's stopping them?

The government needs to do something, certainly. But then, why aren't they, when what needs to happen seems quite clear and urgent? And the answer is the ideology of free market fundamentalism (on the rise since Thatcher), the think tanks that promote it, the politicians that believe it, the oil companies that profit from it, the financial industries that profit from it, the banks that bankroll it, the international free trade agreements that give legal backing to it. These are the demons.

Once we know these are the demons we can begin to fight against them. Their unmasking is their undoing, as darkness is their greatest weapon.

The Right tries its hardest to convince people that the source of their problems are immigrants, ethnic minorities, and "liberal elites"; liberals mistakenly believe the source of the problems are just religious fundamentalists, right-wing crazy people like Trump, backwards-looking right-wingers. These are the things that keep us in culture-wars and that suits the demons because we are blinded from seeing them and really addressing the structural economic systems that are the root cause of our problems.

And I tend to think Extinction Rebellion are naïve in believing that one bill or one Citizens' Assembly will provide the solutions to the climate crisis that will then be enacted by government. This underestimates the insidious power of the demons. They will fight with all the power they have to prevent that. And they have a lot of power and billions of pounds. Only a mass people's movement that names and condemns these demons will counter their power. Only a shift in culture in which it would be a scandal for a Prime Minister to be seen in the same room as an oil executive will take away the power of such people.

So we have to keep naming the structures of Late Capitalism, and the ideology behind it, as the true demons that for thirty years have been preventing action on the climate crisis.

And it's true of course that the problems go much deeper: to centuries of colonialism, empire, extractivism, and ultimately the greed and apathy that exist in all of our hearts. But that shouldn't prevent us from naming the way these realities exist in the world today. The real-life structures and institutions that are affecting the world in this way.

We name them, and we can slay them. The first step is reading Naomi Klein's book, and to start talking about it.

*Full disclosure: I have done this, I took part in a mass cycling event which blocked the road for motorists. My thinking is evolving.