The revolution that nearly happened 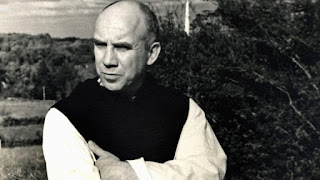 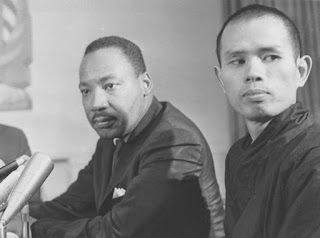 I recently found something out that astounded me. Martin Luther King, Thomas Merton, and Thich Nhat Hanh were supposed to go on a retreat together in 1968. This was scheduled and the only reason it didn't happen was the assassination of King on 4th April 1968.

This astounds me because I feel like that retreat might just have been the start of a revolution, a spiritual revolution that might have transformed the world.

Here were three men: one white, one Asian, one black; one Protestant, one Catholic, one Zen Buddhist; two American, one Vietnamese (at the height of the American-Vietnamese war). Sure, they didn't represent all the diversity that exists on earth (they were all men for a start) but there was significant diversity there.

But also significant unity. Here were three men all committed to radical activism as well as spiritual practice - to a vision of spiritual activism that I genuinely feel could have transformed the world (and might still do). These were three men who knew we needed to transform the heart, purify the soul, to create a revolution of love that might just save the world.

And so in a sense it's not surprising that King was killed to prevent this revolution from happening, as was Merton soon after (probably by the CIA). I think political forces of darkness absolutely saw how revolutionary these men were, and put a stop to this happening.

But I keep imagining - what would have happened? I would love to see someone write a play based on this retreat that never was - to show King, Merton, and Hanh sitting in silence together, eating together, and sharing their words on peace, justice and prayer. I so long for that play to exist. Please make it exist someone!

Although this realisation for me is kind of tragic, it is also kind of hopeful, because I feel like we were that close to this revolution happening. Three men might have sat in silence together for days and then come into the world more deeply renewed and powerful than ever before (and these were already powerful influential people). I just feel like these men were already spiritual giants, and a united front from them would have been truly truly transformational for the world. From the silence of a hermitage in Kentucky the world would never have been the same again. It was a revolution that so very nearly happened.

Lynne said…
Write it Stephen. I was blown away by the possibilities,, maybe they need to show up again and again until we are ready for them. Bit like moments of grace and transformation, we are constantly revisited and re-invited to open. Lynne
4:39 pm

Unknown said…
I WISH I COULD WRITE PLAYS STEPHEN.
YOU ARE RIGHT - SUCH A MEETING WOULD HAVE CHANGED THE WORLD
AND A LOTUS WOULD HAVE BLOOMED.
Lis Dyson-Jones

Unknown said…
I wish I could write Plays Stephen.
What a story and how the world could have been transformed.
Maybe it can still happen. Maybe a lotus will bloom.