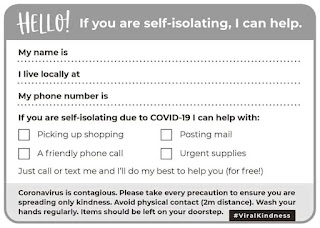 Like many people did when this crisis started I joined my local mutual aid group. I got a load of leaflets with my name and phone number on and I posted them through the doors of a couple of streets (working with others in the group to make sure every street in our neighbourhood was covered).

I spent an hour posting them through letter boxes, talked to one neighbour in person (from a distance) and I knew I had done my bit.

In fact I've only been called upon to collect someone's prescription once. So it's all been very easy, but it's good to know that these leaflets have gone out (I think I'm right to say) to every home in Canton and Riverside.

Then recently I saw another leaflet that someone had taken a picture of and posted on Facebook. This was a very similar leaflet written by a local church, saying much the same. The church (as far as I know) hadn't coordinated with the local mutual aid group, but had taken it upon themselves to do it independently. But the person who had posted the picture was very appreciative and said "look, isn't this nice?"

And it is nice.... but... it brings some questions up, doesn't it? When I posted leaflets through doors I wasn't doing it in the name of my faith. I didn't say that I was a person of faith or a minister, I just said I was a neighbour and could help. I'm sure everyone was appreciative, but no one thought, "oh look, here's faith in action".

They did think that about the leaflet from the church, but I can't help feeling a bit resentful that this church wasn't coordinating with what was already happening. I mean, maybe if everyone offers help, that's not a bad thing? If people get two different leaflets through their door, that's not a terrible thing, but it does display a certain kind of attitude of some churches. Churches want to get into the community and "do good" but if they do it without first finding out what's already going on it can look a bit... arrogant, patronising, colonial.

Why do churches need to do things as churches? Why not work in partnership with other community groups? That's seems the better thing to do, and yet I admit it probably means people don't realise volunteers or projects are from a faith perspective, and so there's no good PR for churches. Churches that do their own thing as churches, as explicit faith projects probably are more likely to grow.

I do think faith groups do have unique and important things they can contribute. If that church put a leaflet through every household in Canton saying "let us know of any things you want us to pray for" I'd have less to object to, but then that leaflet would probably be less universally welcomed in homes.

I've spent two years in Cardiff not doing things in the name of faith, because I believe in partnership and solidarity. I believe in finding out what's already going on, and joining in. But I have to admit that means my ministry is still invisible to the vast majority of people in my community. Perhaps that's partly about there being a time and season for everything. I'm moving into a time when I want to be more explicitly spiritual. But I'm starting from an attitude of solidarity and partnership.

There's a tension here, I feel. What do you think? Should faith groups do things explicitly as faith groups so that they can get the good publicity, or should they work in partnership and risk becoming invisible?