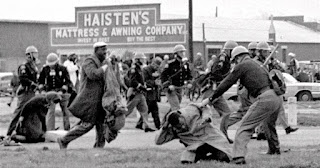 Things get a bit more problematic when protest is not connected to pain. The great problem with environmental protest movements is that they are often disconnected from the experience of pain. In theory protest movements like Extinction Rebellion are responding to the pain of future generations, the pain of animals, the pain of the global south, but the protest is not a response to the personal experience of pain. Often privileged white westerns (like myself) do not experience in an everyday way the reality of this pain, and so protest is much more an expression of privilege. I go on protests, not for my own survival, but because I choose to, because I want to, because I have the privileged ability to do so.

Extinction Rebellion draws inspiration from non-violent direct action movements of the past such as those of Martin Luther King and Gandhi. But, as this long but excellent article by Nafeez Ahmed points out, the difference is that these movements were protests movements that emerged out of the experience of pain. Ahmed writes,


"The American civil rights movement succeeded in its strategy of nonviolent civil disobedience precisely because the very black communities rising up were the victims of the racist segregation and institutionalised brutality which they were protesting.

The civil rights movement was therefore inherently grassroots and broad-based, emerging from the institutions of black communities.

The goal of the movement was directly related to the suffering of black communities, aimed at ending the segregation, racism, discrimination and constant unmitigated violence committed against black people.

It worked precisely because the people who drove the movement were the very same people who were suffering at the hands of the racist violence they wanted to change. It worked because they themselves were victims of violence, and the movement offered networks for self-empowerment and action against that violence. It worked because the solution was premised on core political changes directly related to the needs of those who wanted change; and disruption actions were targeted precisely at disrupting the system of injustice that was breaching their rights."

Because Extinction Rebellion is not a movement that grows out of the direct experience of pain, because the people who are driving the movement are not the same people who are suffering most at the hands of the system they want to change, it has run into problems.

Actions like the one on the London tube train have looked like (and I think were) the protest of people who are not suffering against the people who are suffering (poor, BAME, and working class Londoners). Of course it was not the intention to be against those people, it was well meaning, but that was the impression and the result.

The disconnect between pain and protest also means the Extinction Rebellion actions are, perhaps, a bit more fun than they should be. Don't get me wrong, I know people have suffered imprisonment, and nights on cold streets. I know many Extinction Rebellion activists are working very hard, making sacrifices, and are susceptible to burn-out, despair, and depression. But nevertheless, this is still not quite the same thing as a daily, lived experience of pain and persecution at the hands of a system.

But when it comes out of a relatively privileged life it is a bit different from songs of protest and joy that emerge out of an experience of oppression and pain. It doesn't quite come from the same place in the soul, the place of joy that comes on the other side of pain.

It feels like what is limiting Extinction Rebellion right now is its attempt to do protest disconnected from the experience of pain, disconnected from oppression. Indeed, as the Ahmed article points out, this is a serious problem in its tactics based on a flawed understanding of the social science. It may be that these tactics will not work because the protest is too disconnected from the pain.

Then what is the solution? Is it possible to protest when you are not personally connected to the pain? Yes it is, it's called solidarity, and it's really important and powerful. Solidarity is the intentional practice to enter into the pain of another, to feel their pain, and to act shoulder to shoulder with them in the work. Or perhaps, behind them, letting the people with the experience of pain take the leadership and acting only to support them.

What has been missing, I think, with Extinction Rebellion is a deep enough commitment to solidarity. There hasn't been enough lifting up of the experience of people suffering under the climate crisis. We say "Listen to the science!" (and indeed we should) but we need to also say, "Listen to these voices from the global south. Listen to Pacific Islanders. Listen to Bangladeshis. Listen to people from Mozambique. And listen to Black Lives Matters, listen to Wretched of the Earth."

Yes, on a global and complex issue like the climate crisis it is much more difficult to do this kind of thing. But it also makes it more important. The only way Extinction Rebellion will mobilise millions of people in repeated protest actions is "direct, painstaking street-to-street organising, training, educating, network-building, and so on, within affected communities themselves." It will be the poor, the working class, and BAME communities that will be most effected by this crisis, globally and locally. So until privileged people within Extinction Rebellion see their (our) primary purpose as acting in solidarity with those communities, we will continue to protest outside of the experience of pain, and that protest will always be enfeebled and ineffective.