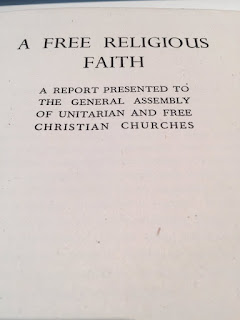 I'm currently on sabbatical so have a bit more time for thinking and writing, so you can expect a lot more content on this blog over the next few months.

The first thing I'd like to share is the book I've just finished reading "A Free Religious Faith" a report created by a commission of the Unitarian General Assembly and published in 1945.

This book has been gathering dust on my shelf for many years (and many other people's shelves before that probably, it's a second/third/fourth-hand book and I can't remember where I got it). But having read it, I think there's a number of things that are really fascinating about it.

First, that it was written at all seems quite remarkable. In a way it is an attempt to write a coherent description of Unitarian theology, published by the denomination. True, there's always a bit of a freedom clause thing in the preface to say this isn't a once-and-for-all-official-theology, but still it is a denominational statement of theology, the likes of which has never been seen since. In that sense it reminds me a bit of the Racovian catechism written by the Polish Unitarians.

It was written by 13 men, collectively, and so there was clearly enough agreement among them for this to be possible, though there are a few "minority reports" giving some dissenting views. But, apart from that, the report is written with one voice, and that in itself seems remarkable. I'm sure Lindsey press today could publish a book of 10 individual chapters giving individual views on things, but to seek one report that all will put their names to? That would be harder.

The report is an argument for a basically liberal "rational" cool (as in luke-warm) theism/ Christianity. There's a gentle self-confidence to it that I kind of like. I also found it gratifying that some of the foundations of Unitarian theology I've been trying to articulate are also spelled out pretty clearly here. It adds to an argument that I have made that we really do have a coherent theological tradition.

It's also remarkable how contemporary some of it seems, how we've been having the same conversations for decades. It starts by saying "religion is in decline, lots of people don't go to church" which is almost hilarious given the difference between now and 1945, but it's good to be reminded the trends we're experiencing having been going on for a very long time.

But overall this is a very flawed document. With the hindsight of history it seems laughably irrelevant in some ways. This is something written in 1944/1945, and yet the Second World War is never explicitly referred to. The great historical realities of war, Nazism, the Holocaust, the development of nuclear weapons are staunchly ignored. Now some of those things weren't as clear in 1945 Britain as they are now, but some of them were.

Even trends that had been happening for some time don't get a look in: the First World War, the rise of socialism and Labour, the decline of the Liberal Party and the decline of nonconformist churches, and the Great Depression are ignored too. There is not much historical consciousness.

This is a document that is rather theoretical. It spends a fair bit of time dealing with challenges to religion from Darwinian evolution and modern psychology, which is fair enough, but these issues were not the only or the most pressing ones for theology at that moment.

I can imagine the Ministers in the commission serving congregations where people were malnourished through rationing, deeply worried about loved ones serving in the forces, likely to be killed at any moment, and facing death at times through the blitz. And yet these Ministers were able to put these things entirely out of their minds when in the comfort of their own studies they wrote about ethical and theological questions.

And more practical. Like a lot of systematic theology the report tags "worship" and "church" at the end of the report and doesn't say anything very interesting in those chapters. The report can say things like developing a religious sense is essential to developing a full humanity (33) and yet not go on to ask if our churches are doing this effectively. Are the Sunday gathering, hymns, prayers, sermons by ministers, Sunday schools, social clubs etc developing the religious sense that is so important? If they are how are they doing it? If they're not why not? These sorts of questions are absent.

So there's a lot it doesn't do. But I am glad this report was written, and I feel like it should be better known and read, at least by ministers and Unitarians wanting to go more deeply into their faith and theology.

And I can't help wondering why similar reports haven't been written every twenty years. Imagine a report like this written inn 1965, 1985, 2005. No doubts those reports would be much different, and yet we would be able to see Unitarians trying to coherently express our theology every generation. I think that would be no bad thing.