The work of an evangelical Unitarian

Here's a case in point. Unitarians are opposed to the blasphemy law in Britain. We passed a resolution at the 2002 General Assembly saying that. Well, that's a start. Then last November Essex Hall held a Celebration of Blasphemy evening of light entertainment. Fine, but these things are just us talking to ourselves. I'm sure we wrote a letter to the Government. Well, big fucking deal. Do we think this makes a difference? Do we think this is good enough? No, this is self-congratulatory posturing. And it doesn't filter down to the congregations.

If we believe in something we have to be completely committed to it, and evangelical in getting our message out.

So last week I started to practice what I preach. Literally actually. A few months ago I preached (my first sermon ever in fact) about the abolition of the blasphemy law. Now the opportunity arrived to get the message out to a wider audience.

Jerry Springer the Opera, the controversial West-End show, began touring the country and came to the Birmingham Hippodrome Theatre for a two-week run. The first week I went to see it. It's very funny. There is a hell of a lot of swearing. The first half is a Jerry Springer show, set to music, and Jerry gets shot at the end and in the second act goes to hell, where he does another show with Satan, Mary, Jesus, God etc. It's all quite silly.

Anyway, far right Christian groups like Christian Voice have been very vocal and in calling the show blasphemous and protesting outside. They have been putting out inaccurate and homophobic comments about the show. Once again Christianity is being presented as reactionary and conservative and this is the only form of faith that most people have any contact with.

So I decided it was worth getting the alternative message out. To protest for the abolition of the blasphemy law and also to promote Unitarianism.

So Wednesday, Thursday, Friday, and Saturday I got down there to the Hippodrome and handed out leaflets about Unitarianism and abolishing the blasphemy law. There were Christian protesters there, but sometimes only two or three. They tended to ignore me, which was fine, because I didn't expect them to change their mind about anything. The thing I found most worrying when I read their leaflets was that some of them were Methodists and Catholics. I assumed they would be some sort of independent evangelicals. But no, these were people from mainstream denominations. Where are the liberals?

I was really nervous about doing it. I would have preferred to stay at home. My lips are still chapped from spending so much time out in the streets at night. But I kept thinking about James Luther Adams saying that your faith should change you, should convert you, should make a difference in what you do in your life. So I did it.

The most amazing thing, which I didn't expect in the least was this: someone came back to me after reading the leaflet and asked, 'Is there a Unitarian meeting in Birmingham?' I explained where the church was, and the next day on Sunday she was there! Amazing. Maybe, she'll stay, maybe she won't. But this confirmed to me that this was the right thing to do. And Unitarian evangelism does actually work. I'm more confirmed that ever in my desire to be a Unitarian missionary. 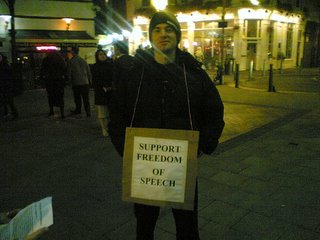 Thanks for the guy in the street for taking this photo and emailing it to me. Ta mate!

LaReinaCobre said…
Yay for Stephen! You are awesome, and I am really inspired.
7:32 pm

Anonymous said…
Good job, Stephen. I hope you don't mind if I add a link to your blog at our "Faith of the Free" (Evangelistic UU) Yahoo group site here in the USA...(over at groups.yahoo.com/group/Faith_of_the_Free).
11:25 pm

Joseph Santos-Lyons said…
you look fabulous brotha. keep it up, and thanks for the excellent communique's
2:58 pm

August 09, 2009
When I started this blog nearly 4 years and nearly 300 posts ago one of the labels I used for it/me was "radical." Perhaps I used it a little unreflectively. Recently I've been pondering what radical means. A couple of things have made me think of this. Firstly this blog series from my friend Jeremy, which explores a distinction between "radical progressives" and "rational progressives." There is also this definition of radical, liberal and conservative from Terry Eagleton quoted at Young Anabaptist Radicals : “Radicals are those who believe that things are extremely bad with us, but they could feasibly be much improved. Conservatives believe that things are pretty bad, but that’s just the way the human animal is. And liberals believe that there’s a little bit of good and bad in all of us.” What interests me is finding a way to express the tension I feel sometimes between myself and the wider Unitarian movement. One way to express this is to say I
3 comments
Read more